Gendered spaces are geographies in which gender relations are constucted and conceptualized. According to Daphne Spain, author of Gender Spaces, gendered spaces are spatial arrangements that may enforce/ reinforce certain status discrepancies between men and women. These locations often separate women from knowledge used by men to produce and reproduce power and privilege.

The spaces I highlight are located on and around the Santa Clara University campus, from 1961, when women were first admitted as undergraduate students at SCU, to the present. These gendered geographies are not meant to be viewed as fixed and permanent. Rather, my research hopes to illustrate how spaces, both physical and theoretical, are malleable and can be contested and challenged, in hopes of deconstructing dichotomies in the form of spaces for men or women.

After analyzing these places, which I have broken down into dorms, classrooms, and extracurricular spaces, I hope to show how what spaces once upheld gender binaries were over time deconstructed to be locations where feminist discourse and intonations of gender equality began to emerge, emphasizing the malleability of gendered spaces. 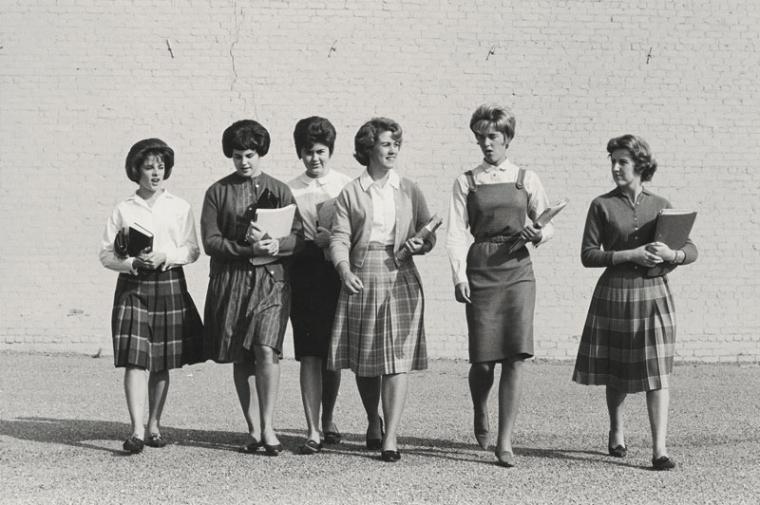 It wasn't until 1961 that women were first admitted to the previously all-male Santa Clara University. This decision came after decades of deliberating, defining, and increasing women's presence on campus beginning in the 1930s with the establishment of clubs for the wives and women on campus.

In the interest of being forthcoming, and to promote the circulation of accurate information related to this topic, I want to introduce my exhibit by first disclosing the lens through which I chose to conduct my research, and providing some background. My research was conducted through a feminist lens, which influenced how I interpreted and presented the materials. I will be looking at the documents and other materials that I have compiled through this lens, and will provide context wherever I can as to why I chose to interpret things in the way I did, and how you could view them differently.

The best way to contextualize what a feminist lens entails is to explain feminism in its most basic terms. Feminism is defined by the belief that women are not inherently less or more dignified than men, and therefore should be treated equitably. So by conducting my research through a feminist lens, I interpret documents that reflect a misogynist or otherwise prejudiced viewpoint in a way that understands and contextualizes the disparity with modern societal standards of respect.

What is title ix?

Title ix was an amendment passed to federal civil rights laws in 1972 that aimed to do away with discrimination based on gender in institutions of learning. The policy states "No person in the United States shall, on the basis of sex, be excluded from participation in, be denied the benefits of, or be subjected to discrimination under any education program or activity receiving Federal financial assistance" (US Department of Education's Office of Civil Rights).